Naqsh-e Jahan is one of the largest squares in the world,earning a listing as a Unesco World Heritage site. The name means ‘pattern of the world’ and it was designed to showcase the finest jewels of the Safavid empire – the incomparable Masjed-e Shah,the elegant Masjed-e Sheikh Lotfollah and the lavishly decorated Kakh-e Ali Qapu and Qeysarieh Portal. It is has changed little since it was built,and at each end the goal posts used in regular polo games 400 years ago are still in place (these polo matches are depicted on miniatures for sale around the square). The only modern additions are the fountains,which were added by the Pahlavis,and the souvenir and craft shops,which occupy the spaces on either side of the arched arcades.

Allāhverdi Khan Bridge,popularly known as Si-o-seh pol,“The Bridge of thirty-three spans”, is one of the eleven bridges of Isfahan, Iran and the longest bridge on Zayandeh River with the total length of 297.76 metres (976.9 ft). It is highly ranked as being one of the most famous examples of Safavid bridge design.
It was constructed by the inspection and the financial support of Allahverdi Khan Undiladze chancellor of Shah Abbas I,an Iranian ethnic Georgian. It consists of two rows of 33 arches from either sides,left and right.

Khaju Bridge is one of the most famous,oldest and finest of Iranian bridges in Isfahan. It was built by the Persian Safavid king,Shah Abbas II,around 1650 AC on the foundations of an older bridge. Serving as both a bridge,and a dam (or a weir),it links the Khaju quarter on the north bank with the Zoroastrian quarter across the Zayandeh River.
The bridge is constructed with multi-purpose; it is not only used for transportation but also as weir. It served a primary function as a building and a place for public meetings. This structure was also originally decorated with artistic tile work and paintings,and served as a teahouse. In the center of the structure,a pavilion exists inside which Shah Abbas would have once sat,admiring the view.

Built as a pleasure pavilion and reception hall,using the Achaemenid-inspired talar (columnar porch) style,this beautifully proportioned palace is entered via an elegant terrace that perfectly bridges the transition between the Persian love of gardens and interior splendour. The 20 slender,ribbed wooden pillars of the palace rise to a superb wooden ceiling with crossbeams and exquisite inlay work. Chehel Sotun means ‘40 pillars’ – the number reflected in the long pool in front of the palace. 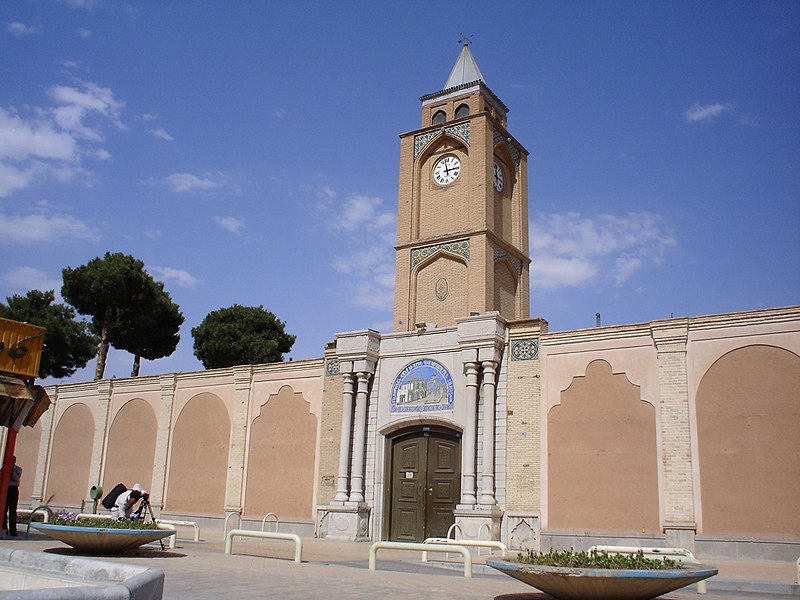 At the beginning of the 17th century in 1606 during Safavid period,work on the cathedral began. However,in 1655,this Armenian church was rebuilt as the Christian community was rapidly growing in Isfahan.
A tilework plaque inscribed in Armenian can be seen by the entrance to the cathedral. Inside is nicely decorated showing a mixture of Islamic and Christian style. Inside the courtyard,there is the belfry and can see the dome of the cathedral which the interior is painted in Persian style with very elegant blue and gold. The walls are painted of European inspirations showing scenes of martyrdom,notably of Saint Gregory.
Jolfa is the Armenian and Christian quarter of Isfahan which was established in 1603 during Shah Abbas I Safavid. Jolfa is located on the south bank of the Zayandeh River and is linked to the Muslim part of Isfahan by Si-o-se-pol bridge.

In Iran,there are some minarets which have the ability to shake called Monar Jonban; The most famous Monar Jonban,one is located in Isfahan and other in Ardakan and Kharanegh. The Monar Jonban (Shaking Minarets) is a monument located in Isfahan in which mystic known as "Uncle Abdullah Karladany" was buried. It is a building with 9 meter width and 17 meters height and famous for its shaking minarets; when one of the minarets shakes,the other one start shaking and whole building too.
The iwan and porch were built according to Mughol style; and it has tiling from that time too; but the shape of minarets indicates that they are added to iwan at the end of the Safavid period. For a long time,it had been questionable for scientists why minarets shake. Mysterious architecture of this building still remains unclear and questionable. Physical phenomenon of resonance is the most logical reason to shake the minaret. The similar architectural style of the minarets is the reason that cause by shaking of one of the minarets effects on the other. The interesting thing about this monument is that by moving a minaret,not only the other minarets but also whole building shake.

This mansion is an example of residential palaces of last Safavid rulers. It has built on the 1080 A.D and its other names are Eight to Eight,Eight to Eden,Night angle garden. It is an octagonal mansion with four facades which with all similarities no one is like the other. It looks like north facade is the main facade while the existence of pool in the east side of main façade is determiner. This mansion has built two meters above the ground level and has two floors. first floor rooms in the four corners of the mansion has stucco and painting ornaments,in the second floor there are a series of porches and rooms with inlaid doors and windows. In the middle of the hall there is a pond made of marble which is known as pearl pond. The feature of this pond is that the water comes out of its holes like pearls.